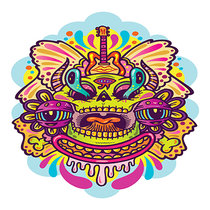 Fall down the monster rabbit hole into a dream like dimension where anything is possible and colour has no boundaries. His army of psychedelic characters playfully disorientate you to a place that oozes a twisted harmony and Zen. Influenced heavily by music of a rock era gone by The Beatles, Pink Floyd, Jimi Hendrix, Led Zeppelin & The Rolling Stones. Taking the viewer on a trippy ride of banjo playing, guitar strumming, monster drumming feel good absurdity.