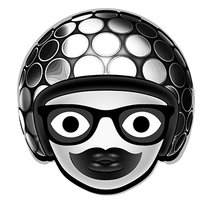 Studied Fashion design at the KASK Royal School of Arts in Ghent, Belgium. A few years into the course he discovered that creating characters and stories in a setting was more of his interest than actually creating clothes.
Dropping out of school but continued the creation of his own cartoon-ish world of illustrations that eventually led him to the field of fine arts.
Since a young age he has been influenced by fashion, art, nightlife and pop culture. People like Leigh Bowery, Boy George, Judy Blame have influenced his work greatly... till today.
Next to exhibiting his personal artwork in galleries he worked freelance for various projects and has been assistant curator at the Center for Young Arts.
Currently lives and works in Doi Saket, Chiang Mai, Thailand.