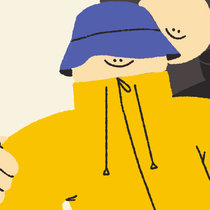 Crayoncrayon lingers in London where he's an illustrator. Under his real name Valentin Blondel, holds in his pockets his obsession for details, twisted and shaped bodies, typography, curves and geometry, sound - those who make it and those who listen to it - as well as subcultures, with which he composes a ingenious broth, both detailed and casual.