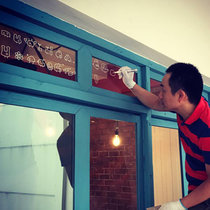 Born in Japan 1972.
He studied fine arts at Kyoto City University of Art followed by a course in multimedia at IAMAS (International Academy of Media Arts and Sciences / Japan). After winning a 2001 MILIA the new talent award, he worked at the French creative design studio Team Chman (2001 – 2003). He has created character illustrations for the major advertisement projects such as Nivea, Coca-Cola.
Akinori’s innocent-looking characters provide a source of entertainment for both children and grownups. In 2011, Akinori became the first Japanese to have his work featured on the cover page of Open Sky magazine on board Emirates Airline. In addition, he also worked on Yo Gabba Gabba, a children’s animation show in the US.
Today, he is based in Japan, working as worldwide.